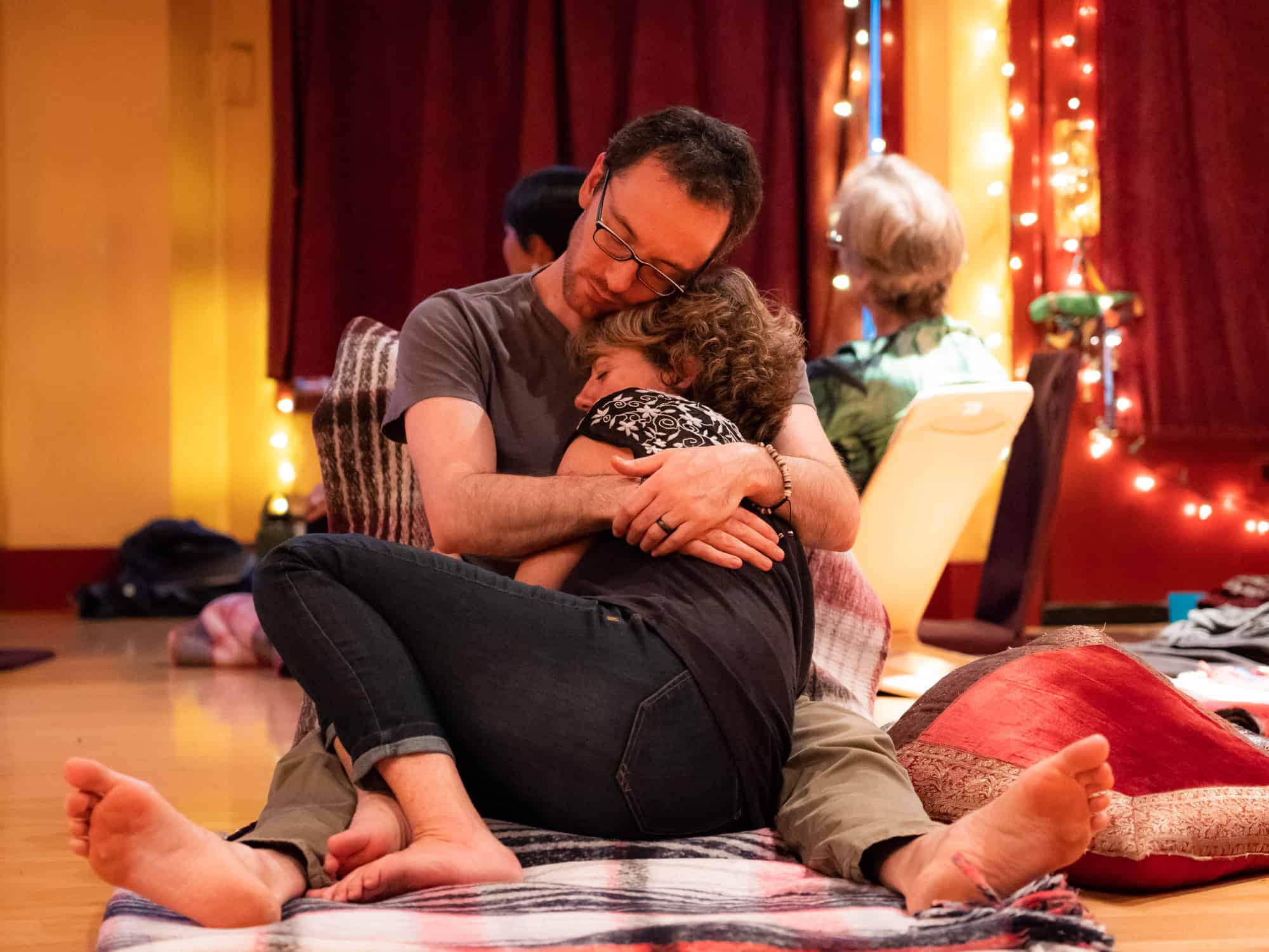 I looked into my father’s eyes, with nothing to do, nothing to say, just the spaciousness to be there. As we continued to mill (eye gaze), tears began to well up in his eyes, a sight I had witnessed only a handful of times in my life. My heart began to melt and tense up, simultaneously. I felt alive, with my family, like I had not felt since I was very young.

How did I get here? This was not a standard way of being with my blood family. Yet, it felt as if I was finally home.

I have long desired to connect with my family in the ways that genuinely nourish me. For the last several years, I have been torn between a sense of obligation to enroll in our established norms of relating, and getting the connection that I see is possible between humans – with my family. This past month I have moved deeper into creating this with my family, and the results have touched me deep to the core.

The desire for richer relationships with my family began several years ago. I had been practicing authentic relating in various forms for a while, and had begun to dive deep into its use in friendships and in the way I related in most of my interactions. I was beginning to experience presence, understanding, curiosity and love like I had never known. As this continued to develop and grow, I noticed a divergence between how I related with my blood family and how I related with most other humans I encountered. With this noticing of divergence, sadness began to follow.

I struggled, and continue to struggle, with the desire to have this with my original family. I began experimenting in both light and heavy vulnerability, expressing desire, and stating what was true for me with them, all with mixed and unsatisfying results. I began to observe a complexity in these relationships that did not exist elsewhere. I found myself often in very young-feeling places in relation to my parents. From these places, I needed attention and care that I could not articulate or that could not be met by them, in the ways I needed. I found, as I opened up with them, that it unearthed parts of me that pulled me far from equanimity. I felt ungrounded in a way that I had rarely experienced elsewhere.

I felt enormous grief around the looming reality that I may never be able to be seen by my parents the way my heart longed for. As I continued to experiment, I found myself oscillating between the story that it was impossible, and the knowing that I could do it, but it would require me to have the courage to lead – to be vulnerable first. I contracted when I believed the former and I expanded when I believed the latter.

In the last year, this process has continued to unfold. I have continued to gather powerful tools from different models of relating and have experimented with them. I attended an authentic relating intro workshop offered by Authentic Relating Training (ART) International in the fall and then an advanced workshop in the early winter. I initially just wanted to see what others were bringing into the world in the realm of authentic relating. Little did I know that I would leave with the seed planted of how I could finally move closer to my desired relationships with family.

The most memorable teaching that I experienced was the creation of context within a relationship, and the molding of it with consent to create a sense of mutuality between multiple humans. This simple technique had been overlooked by my prior attempts to establish connection with my family. It wasn’t as if it was a new idea to me; it completely made sense. I had used it in other relational settings with great success. But it was as if the density of the blood family ties was so thick, that I could not see the way that I could lead compassionately with my family. Something about those workshops help solidify this possibility. After a month or so of letting the new lens settle, the opportunity presented itself.

I had a birthday in early December and we were planning a family gathering to celebrate as we had so many times before. As I was thinking about what to do, I realized I wanted authentic connection with my family for my birthday! So, I reached out, described what I wanted to do and why, shared how I desired for others to participate and gave opportunities for them to alter how they would participate to their liking. This was scary! It was scary because it was possible that I would be rejected. Potentially, rejected in something that was so dear to my heart, by my family. Joyfully, they all consented and welcomed the opportunity!

A week later, just after dinner, the time had come. Again, I found myself scared to initiate the activity everyone had already consented to. What if they didn’t like my way of connecting? But courage leapt forth and I asked for what I wanted, again met with acceptance.

After a brief setting of context, I began to facilitate the exercises. We began with silent milling in dyads. I had never been with any of these humans in this way and was excited/nervous to see how they would receive it. We spent some time with each person and I found myself in a strange mix of relaxing and tensing at the same time. I witnessed both my parents without the noise of norms and standards that I had become accustomed to. I saw their hearts. My brother and his partner also opened, though they both felt slightly less receptive, but still willing.

Next, we played the noticing game, where we shared what we were noticing about our present experience, in dyads, for 5-6 minutes. I was paired with my brother and noticed a stark contrast in the types of things we noticed being with each other. At first, I was wanting more emotional content from him but as time went on, joy seeped into my experience in being with him just the way he was. I began appreciating the differences and a sense of nostalgia set in that was delightful.

Following that, we got into triads and played the desires game with everyone getting three minutes to ask for whatever they wanted. I was partnered with my Mom and my brother’s partner. I decided I would go first and attempt to model what was possible. I asked for touch in the form of hand massages from each of them. Admittedly, this was a tamed version of my desire, but I wanted to honor their introduction to something of this nature. I then asked them to sing with me as my time finished. I then witnessed everyone showing and experimenting with their individual edges.

Finally, we played birthday guru with me on the platform. Everyone got the opportunity to ask me whatever they wanted and, even though people were showing signs of fatigue, they asked questions out of genuine curiosity, in my perception, with a little facilitation from my partner.

After we finished, my parents expressed how much they appreciated the activities. They shared that they loved being able to see their children in such a vulnerable, open way. My father remarked that it felt as if they just needed the intention to be set so that they had permission. Everyone expressed gratitude for me creating the space for something like this.

A few weeks later, I spent time with them over the holidays and still felt the new openness that had been cultivated that night. There was a new warmth that resided in our family’s relational field. I acknowledge that this will continue to take practice and development, but today I am celebrating just this first step! It feels big in my system.

I see this as one of my last frontiers in authentic connection. One of the few places in which being vulnerable is the hardest for me. A place where I deeply desire to have my authentic self seen. I have a story that if I can cultivate it here, I can do it anywhere. So, I feel hope. I feel wonder. I feel my explorer itching to wander into the new depths of the relational landscape.

The 4th Practice of Authentic Relating: Own